Work accelerated at Ephesus for UNESCO 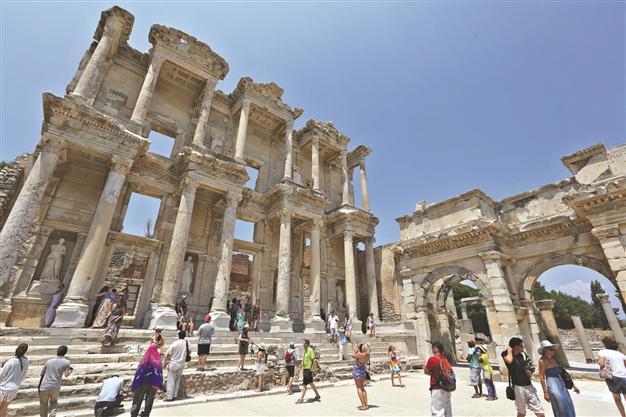 Dating back to the 6th century B.C., Ephesus hosts around 2 million tourists every year. Officials are now trying hard to meet UNESCO requirements.

The ancient city of Ephesus in İzmir has yet to be included in the UNESCO World Heritage List due to the site failing the meet the required standards, with work being accelerated in order to meet these requirements.

Dating back to the 6th century B.C., Ephesus hosts around 2 million local and international tourists every year. The first application for the city to be included in the world heritage list was made in 1994 and although it has been added to the UNESCO tentative list, along with 37 other sites in Turkey, it has failed to be included in the main list.

Selçuk Mayor Zeynel Bakıcı said that the value of Ephesus was known to everybody in the world, but some work was still required before it could be added to the elite list. “Foreigners ask for Ephesus to be included in the [UNESCO] list more than we [Turkey] do,” he said, adding that the biggest deficiency in the ancient city was how the site was managed.

“We have been working on improving the way that Ephesus is managed. There is no problem with Ephesus. Internal administrative protocols have been ignored so far and when they are completed, it will be easier for us to be added to the [UNESCO] list. The UNESCO committee that will visit the ancient city have some expectations. We will get a positive result when we offer them what they want. I believe that Ephesus will enter the list in 2015,” Bakıcı said.

It has been reported that the UNESCO committee will go to the ancient city in September and a decision on whether Ephesus is added to the list will be announced in March 2015.