Recent research shows that a wall-painting in Turkey might contain world’s oldest map.

In a 9000 year old ruin, nearby the old Turkish village Çatalhöyük, the wall-painting has been made in the same period an eruption occurred of the nearby volcano Hasan Dağı.

Because of this discovery it has become more likely that the wall-painting, although the test of time has been hard on the paint, pictures a street-plan of the village during a volcanic eruption. This was already claimed by some scientists.

This conclusion a group of American researchers published in the science magazine PLOS One.

Part of the conclusions of the research suggest that the volcano also erupted 6.600 BC. And around the time the wall-painting has been made.

“Now we can say that without a doubt”, says head-researcher Axel Schmitt on NPR News, “people has lived in Çatalhöyük in this period of time.”

The findings suggest, according to head-researcher Schmitt, that the wall-painting indeed suggest a picture of the village. And that it was painted during a volcanic eruption. And with that it instantly makes it one of the oldest, if not the oldest, street-plan ever discovered.

Volcanic eruptions are very impressive. Perhaps the villagers found some connection with the volcano and that’s why they pictured it next to their street-plan.

Also Keith Clarke finds the results of the research convincing. Mr Clarke is a leading authority in the field on historical maps. “We can’t be 100% sure of the findings, but the evidence is building op that it is indeed some sort of map. And most likely as street-plan.”, says Mr Clarke.

There are also alternative theories about what the wall-painting actually is supposed to depict. Researchers of the University of Cambridge suggest the painting is that of the skin of a sloth. 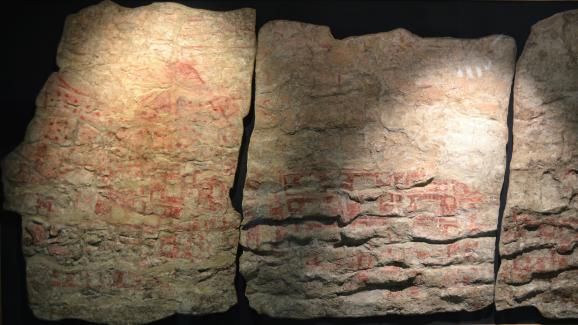 Picture of the wall-painting, taken by Axel Schmitt.