Turkish Prime Minister Recep Tayyip Erdoğan has described Istanbul’s third airport at its groundbreaking ceremony as 'a monument of victory'. 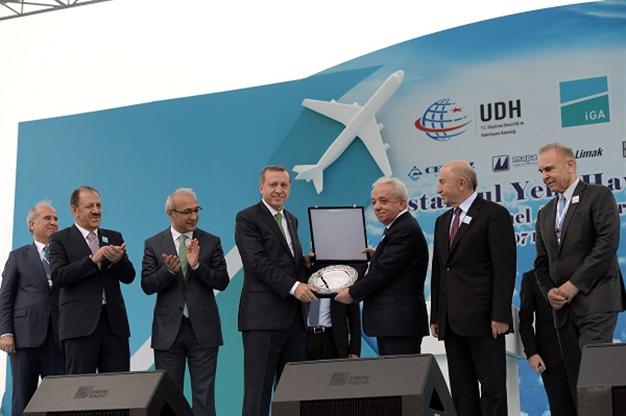 The five companies which won the tender thanked Erdoğan by presenting a plaque at the ceremony on June 7.

The construction of the world’s largest airport begun on June 7 in Istanbul with a massive groundbreaking ceremony with the participation of Prime Minister Recep Tayyip Erdoğan who addressed tens of thousands of people.

When fully completed in 2018, the 10 billion-euros airport will be able to carry 150 million passengers a year, making it one of the world’s busiest airports. The name of the airport has not been announced although there were expectations that Erdoğan would announce it during Saturday’s ceremony.

Erdoğan, most of his Cabinet, and high-level officials from the Justice and Development Party (AKP) were present at the ceremony. But President Abdullah Gül, who normally attends groundbreaking ceremonies for important projects, was absent from the event.

Turkish PM said the airport would begin operating Oct. 29, 2017, the 94th anniversary of the foundation of the Turkish Republic.

“In the last 91 years of the republic, so many great projects have been realized but today’s project has a different place because of its magnitude, importance and capacity. It is going to mark one of the most important projects of the republic,” he said. This project shows what projects Turkey can realize and which league of countries it belongs to.

"We're building not just an airport, but actually a monument of victory today," the Turkish PM added.

The airport project that has been enthusiastically championed as one of the milestones in Turkey’s development process by the Turkish government has been facing several setbacks, with expected environmental damage triggering the most anger from society.

Dozens of lakes in the area and habitat, as well as the forests, will all be razed to make for the mega project, which will tie into a third Istanbul bridge, which has also been criticized as an attempt to open up Istanbul's northern forests to rapacious development that will enrich the prime minister's circle. 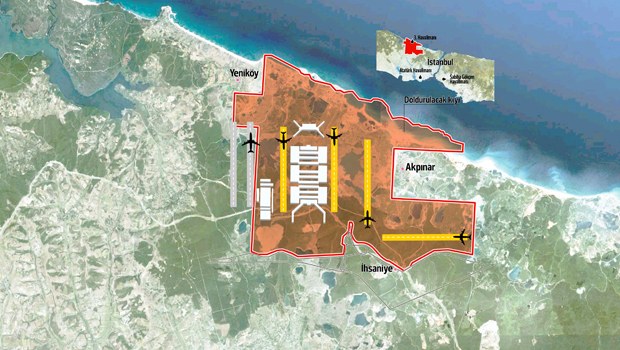 “It’s going to be the world’s most modern airport,” Transportation Minister Lütfü Elvan told TRT in an interview on Saturday just before the ceremony.

“It’s going to be one of five biggest airports. It will be very important for our country’s development,” Water and Forestry Minister Veysel Eroğlu told TRT, underlying that the airport should be named after Prime Minister Recep Tayyip Erdoğan because of his great efforts for this airport. “I suggested it to him in fact but he has shown great modesty and turned it down,” he said.

Industry and Trade Minister Fikri Işık said the airport would give an important impetus to Turkey’s economy especially in the light of the country’s 2023 targets. 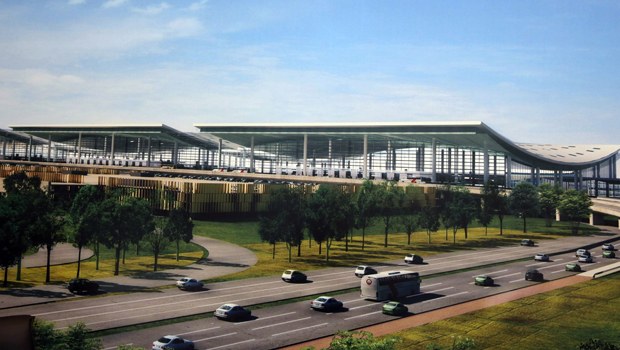 The Cengiz-Kolin-Limak-Mapa-Kalyon Consortium, a joint venture of Turkish companies, won the tender for the airport in Istanbul on May 3, promising to pay the state 22.1 billion euros (plus taxes) for 25 years starting from 2017.

The tender for the build-operate-transfer project, which is to be conducted in four stages, will be for a 25-year lease, with the cooperation of the private and public sectors. The state will guarantee the amount of passengers and tariff levels for a certain amount of time. The first phase of construction is set to be completed 42 months after the tender contact is signed, then providing an initial capacity of 90 million passengers annually.

Once all six of the planned runways are complete, the capacity is expected to increase to 150 million passengers, one of the world’s largest in terms of the passenger capacity at full capacity.
The third airport of Istanbul is expected to provide jobs for 100,000 people, former Transport Minister Binali Yıldırım previously said. More than 5,000 people will work to construct the airport, whose construction is slated to cost over 10 billion euros. A total of six runways, 16 taxiways, 88 passenger bridges, 165 aircraft passenger bridges at all terminals and a 6.5 million-square-meter apron with capacity for 500 aircraft, among other facilities, will also be constructed.

The new airport is slated to be constructed on Istanbul’s European side between the Black Sea regions of Yeniköy and Akpınar, on an area of 7,659 hectares. Some 6,172 hectares of this area is forested land, raising anger among environmentalists about the ecological footprint of the third airport project.