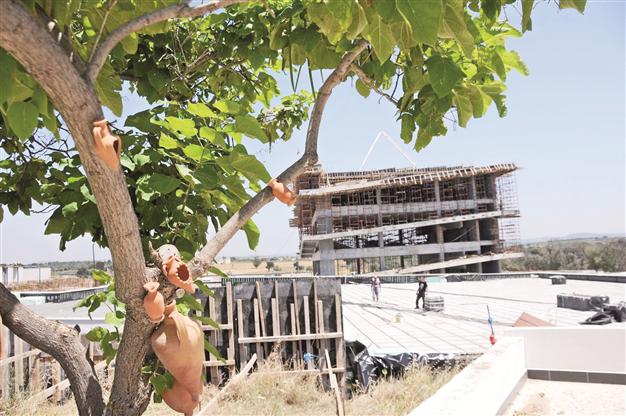 When it is completely finished, the Troy Museum will be a nominee for many architectural awards, according to the construction company officials.

The half of the museum construction that was started a year ago in the ancient city of Troy in the western province of Çanakkale has been finished. When it is completely finished, the museum is expected to be a nominee for many architectural awards for its 5,000-square-meter green roof and sustaining wall that looks like the walls of the ancient city.

The 5,000-year-old ancient city of Troy has been on UNESCO’s World Heritage List since 1998. The museum, which will cost 22 million Turkish Liras, will provide opportunities for the return of smuggled artifacts.

The construction company official İbrahim Eğitmen said the museum would be finished and opened to visits at the end of the year.

He said the museum project had been selected through a competition. “Natural materials are being used in the construction and the museum has a different architecture. Visitors will not feel the building, but see a green museum,” he said.

Plants on a green roof

The three-storey Troy Museum has a 10,000-square-meter closed area. Eğitmen said it would have a 5,000-square-meter green roof and 22 types of plants would be planted on the roof. Rain water will be collected in a water depot next to the museum for the plants on the roof, he said.