The Ahmet Hamdi Tanpınar Literature Museum Library in Istanbul is housed in a historical 16th century building close to the Topkapı Palace and dedicated to Turkish literature. The museum is named after renowned 20th century Turkish author, Ahmet Hamdi Tanpınar, one of the most formative figures in modern Turkish literature. Tanpınar’s books are beginning to draw an increasing interest in the English-speaking world, 50 years after his death.

His iconic novel “A Mind at Peace” (Huzur – 1949), which Turkey’s Nobel laureate writer Orhan Pamuk described as “the greatest novel ever written about Istanbul,” was translated into English in 2008. “The Time Regulation Institute” (Saatleri Ayarlama Enstitüsü - 1962), the second great novel from Tanpınar, was recently re-released in the U.S. The New York Times called the novel “a first-rate comic novel” and it was plugged by legendary American talk-show host Oprah Winfrey.

In 1928, the museum building, which was once used by Ottoman sultans to watch the parades of the Janissaries, was a gathering place for Tanpınar and his literary contemporaries to establish an association dedicated to Turkish language and literature.

Today, the building continues that tradition and holds a variety of public events.

“The Tanpınar Museum also has a library with over 8,000 books. The library has 1,000 books on Istanbul alone,” Guven noted.

“After the Culture Ministry decided to open a literature museum, we asked some authors to donate some of their personal belongings for exhibition at the museum.” Some gave their pens while others donated their old typewriters, Güven explained. “Those belongings will be kept for the next generation.” The museum is open to literary enthusiasts during weekdays between 10 a.m. and 7 p.m. 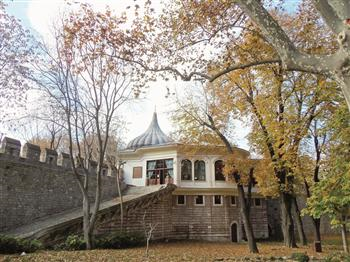 The museum is open to literary enthusiasts during weekdays between 10 a.m. and 7 p.m