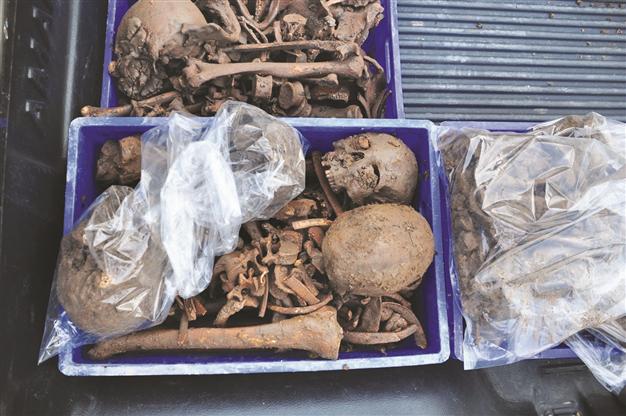 Six skeletons are estimated to belong to the members of the same family.

A Roman tomb has been discovered during infrastructure works carried out by a private company in the western province of Muğla. Six skeletons, 13 bottles, a couple of earrings and a mirror were found inside the tomb. The skeletons are estimated to belong to the members of the same family.

Speaking to press members, Milas district governor Fuat Gürel said many historical artifacts had been discovered during the process, adding, “Museum officials found the tomb when they examined the area. Archaeologists have taken the pieces to the Milas Archaeology Museum, where they will be preserved.”

Infrastructure construction engineer Gökhan Güneş said they had stopped their progress when the Caterpillar construction vehicle came upon a hard object. “We saw that it was the cover of a tomb.
Museum officials came to the area and started working. They found objects like skeletons, bottles, mirrors and jewelry inside the tomb. This is very exciting for us,” he said.