A two-way 60-meter ancient Roman road, which was unearthed in the north of İzmir’s ancient site Agora, has been opened to visits. Tourists who come to Agora after the tourism season begins will be able to enter the ancient city through this road.

The excavations in the area are being carried out under the leadership of Professor Akın Ersoy and his team. The team has also revealed a multi-echelon staircase on the street.

“The continuation of this staircase goes to an area covered with mosaics. This ancient street is 80 meters long, but it reached the sea. This is the most important street in Agora for the passage of goods. Just like in Ephesus, the street blocks water and has a very good sewer system,” Ersoy said.

The first ancient road in İzmir was revealed in a historic market place known as the Silk Road. The second road was found in Agora in Smyrna. There are also four stores that were found on the ancient road. 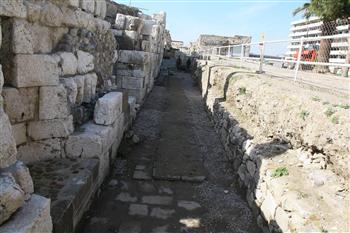