Ramadan protocol in the Ottoman Empire

The Ottomans were much more inclined to stay up the whole of the night after they had broken their fast in the evening. After all, sahur or breakfast had to be eaten before the dawn of a new day broke. They had ways of staying awake from eating late to enjoying entertainments of different kinds. 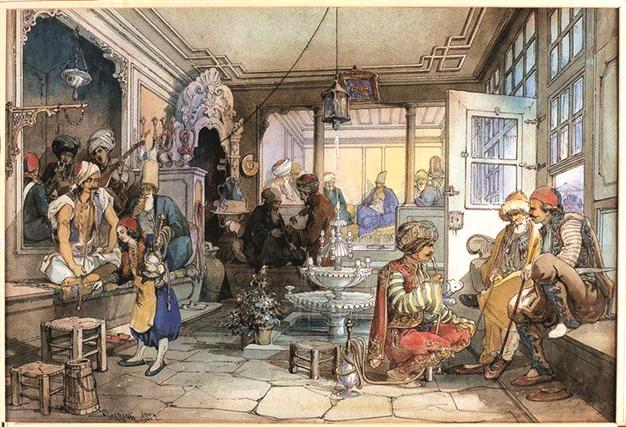 “Burn the boxwood spoons and throw the ashes on the rose garden,” were the instructions given by the wealthy householder who had hosted an iftar dinner to break the fast during the month of Ramadan. The spoons in question had been produced in sets of six, each of the six having the same verse from the Quran on it. The recipients would then find his place at a table on which that same verse had been written. It didn’t matter if a paşa sat next to a poor man or a foreigner next to an imam (Muslim prayer leader). After saying a prayer of thankfulness to God, the spoons would be gathered up. Thus the guests provided the house owner with the opportunity to do a good deed.

The men sat separately from the women unless they were close relatives, but the children could move freely between the two groups during the meal and afterwards. Young girls, if there were any, would bring coffee to their elders who were now smoking, if they cared to, and chatting with each other. After all, there would have been little talk while they were eating. 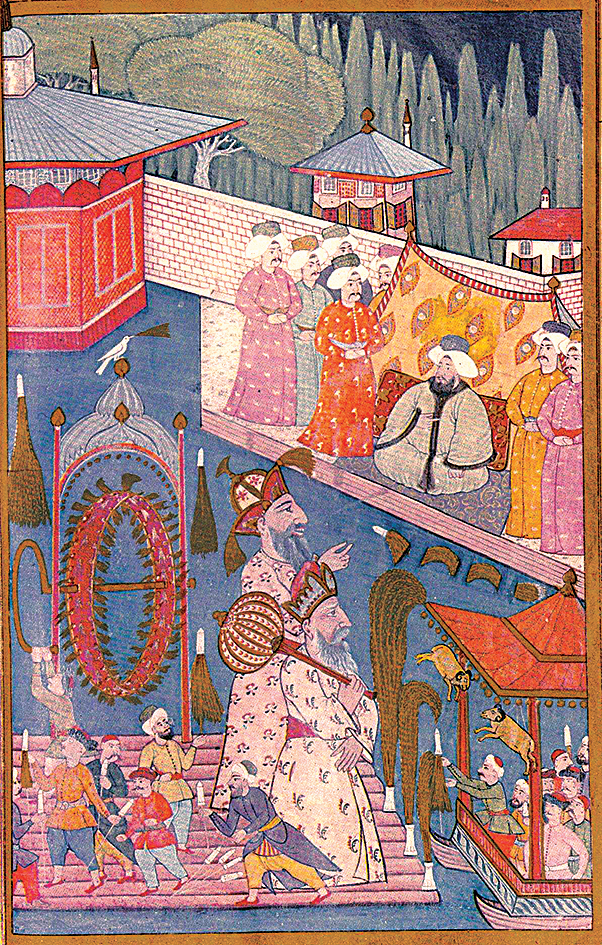 The sultans only began to celebrate iftar within their families after Dolmabahçe Palace was built and they moved there in 1856. Still, they continued the tradition of going to the Hırka-ı Şerif Mosque in which the Prophet’s mantle and other memorabilia were kept. And on Kadir Gecesi (the Night of Power), the sultan would go to pray at Hagia Sofia. Since this was an established custom, the public would gather there to see him pass with important statesmen and their guards.

Following the iftar dinner, the wealthy would give two kinds of parting gifts to the departing guests called diş kirası. For the wealthy and important people, there would be silver trays with amber prayer beads, golden cigarette holders and rings in handkerchiefs of cut velvet. The poor would be given silver akçe (coins) and gold pieces. The recipient would in turn express the wish that God would bless the giver.

For children, Ramadan was a time of entertainment and presents. They stayed up until after the morning breakfast, watching dancers, listening to music, story tellers, watching Karagöz shadow plays and following the drummers. Those who lived close to the imperial mosques in the old city would be taken to see the mahya, that is, the strings of lights between the minarets that spelled out verses of the Quran or depicted scenes of various sorts, including boats and fish. Children fasting for the first time were given presents. Sometimes the adults would tell the children to only keep half the fast and they would buy the other half. The children, in any case, did not sleep until the morning prayer.

In summer, as many people as possible would spend the night along the Golden Horn or the Bosphorus. Those who had yalıs [mansions on the sea side] would invite each other and travel between homes by caique.  When passing an important person’s yalı, they would close the parasol that protected them from the sun out of respect. Only the sultan could use a red parasol or tent. If the sultan went to a vizier‘s home or a prince’s, he would use the largest caique and be followed by escort ships; the people would shoot cannons and fireworks in salute.

The men from the neighborhood might also go to coffeehouses, found in the larger districts, where people would read folk poetry (semai kahvesi or folk poetry coffeehouse). These might also include those responsible for policing the neighborhood against drunks and thieves. This type of coffeehouse would be open for 24 hours from the first day of Ramadan until the last day before the Ramadan holiday when they would revert to normal coffeehouse hours. The person entering after paying a fee would say, “As-salaam alaikum, kavhehane millet” and everybody would return the greeting. One person would read while everyone listened and that person would not have to pay for his coffee. Each coffeehouse had a high sedir (a platform with a divan) and there the minstrels sat. Two would engage in a contest and the winner would be invited to other coffeehouses free.  Another way to win prizes was finding the answer to a puzzle written at the entrance to the coffeehouse. 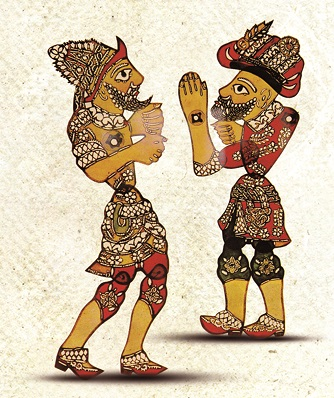 The shadow play, or Karagöz, was also a popular means of passing the night hours. Karagöz and Hacivat are the two main characters in these plays that depended on a rapid dialogue between these two and other, less important characters. No one knows exactly when the shadow theater started in Anatolia, although the late scholar Metin And theorized that it originally came from Egypt following the Ottoman conquest there in 1517. A number of the plays have been written down and so we know that the dialogue was more bawdy and scatological than we see in today’s revivals.

The drummers passed, waking those who would partake of sahur, or the breakfast meal before fasting began for the day. The Prophet Muhammad recommended that all Muslims should eat something, although, aside from dates, he did not seem to have suggested any particular food item. The idea was to provide sufficient energy and good health to face fasting all day. In reality, this usually meant eating food that was left over from the iftar meal the night before, but not very heavy and drinking, plenty of liquids including soups so as to not become dehydrated during the day. At the end of the meal that had to happen before one could tell the difference between a white and a black thread, one declared the intention to fast during the day and, at least during the summer, went back to sleep for a couple of hours.