Homepage > Ottoman master Matrakçı Nasuh to be commemorated by UNESCO

Ottoman master Matrakçı Nasuh to be commemorated by UNESCO

UNESCO has added a 16th-century Ottoman swordsman to its 2014 agenda to commemorate him on the 450th year of his death. Matrakçı Nasuh is described as one of the most gifted swordsmen in history.

Turkish historian Erhan Afyoncu has described Nasuh as a Hazerfen, a person with vast knowledge over various subjects. Afyoncu noted “His most important skill is swordsmanship. He traveled to Egypt and participated in games. After beating all his opponents, he was praised by Egyptian rulers.”

Nasuh also received an imperial order from Sultan Suleiman the Magnificent for his sword skills.

His title Matrakçı is derived from a sword game, Matrak. A historic form of swordplay to assist with training soldiers during peaceful times. It includes a long wood stick and fence and the aim is to hit the opponent first. “Nasuh was the master of that game,” Afyoncu said.

Other than Matrak, he was known for his art miniatures. He created a style that focused on panoramic views of landscapes and cities painted with great detail. He miniaturized buildings, places of worship, surroundings and places where the Ottoman army rested.

Nasuh of Bosnian descent wrote books on mathematics. Afyoncu said, “Those books included formulas to help bureaucrats with the treasury.” He said that Nasuh wrote many books, some recently discovered they actually belong to Nasuh himself. He died in 1564. 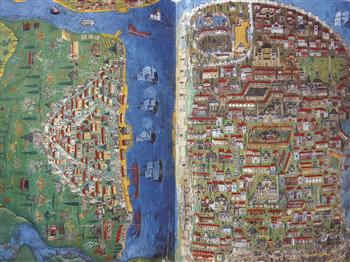 This photo shows a map drawn by Matrakçı Nasuh