A portion of the Dolmabahçe Palace’s crown prince area, where the sultans’ sons were residing in the time of Sultan Abdülmecid, has been turned into the National Palaces Painting Museum after a seven-year restoration process. The museum will be open to the public on March 22.

Speaking about the museum, the National Palaces Painting Collection official and the Painting Museum curator, Gülsen Sevinç Kaya, said the museum was made up of 11 sections.

Kaya said the first section of the museum was a room displaying the portraits of the sultans Abdülmecid and Abdülaziz.

“In this section, named ‘Westernization in the Ottoman,’ the traces of change in the military and social life in the Ottoman Empire from the beginning of the 18th century can be seen. This was the library of Abdülmecid. There are paintings of Istanbul from local and foreign painters around this section. The most magnificent part of the structure has been dedicated to famous painter Ivan Aivazovsky. In the Turkish painters section, there are paintings by the second and third generation of westernized Turkish paintings such as Şeker Ahmed Paşa, Süleyman Seyyid, Osman Hamdi Bey and Halil Paşa,” she said.

Another museum official, Recep İmat, said the museum displayed 202 paintings. “Visitors will be able to see the whole details of the historic structure during their visits. The place previously belonged to the Mimar Sinan Fine Arts University and it was the Painting and Sculpture Museum, but it moved from here to the Karaköy neighborhood. This museum was established by the National Palaces,” he said. 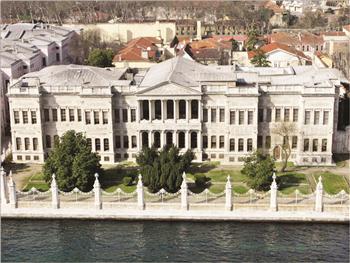