Neolithic Age and UNESCO in Turkey

The ancient settlement of Çatalhöyük will host international experts of the Neolithic Age for a meeting in April. The event hopes to draw the world’s attention to Turkey’s Neolithic culture.

The United Nations Educational, Scientific and Cultural Organization (UNESCO) will bring together specialists of the Neolithic Age in the ancient settlement of Çatalhöyük, located in the Central Anatolian province of Konya, known as one of the earliest human settlements.

UNESCO Turkey National Commission President Öcal Oğuz said Turkey would host two important events this year. He said Çatalhöyük was included in the UNESCO World Heritage List in 2012, adding, “Having the traces of the Neolithic age, Çatalhöyük is one of the oldest and most important cultural heritage places on the UNESCO World Heritage List. This is why it has drawn great interest in the world,” Oğuz said.

He added that because of this fact, Konya would be hosting a meeting with the attendees of the specialists of the Neolithic Age and the culture of this age from all around the world in April. The purpose for the meeting was to draw the world’s attention to Turkey’s cultural relation to the Neolithic Age, he said.

“The most important gain for Turkey is the following: We will bring world specialists to Turkey to transfer their international fund of knowledge on the Neolithic Age into our national system. This meeting will start an academic process for our own experts to obtain further information about this age that the world has so far reached. They will get in touch with international experts from then on. Also, by organizing this meeting in the magnificent settlement of Çatalhöyük, we will share with the world Turkey’s strong link with the Neolithic Age,” Oğuz said.

The Neolithic Age refers to 8,000-8,500 years B.C. In this age, people produced smoother and tougher tools and began the agrarian life. Agriculture was discovered and hunting was less essential, animals were domesticated and pots and pans started to be produced.

This age, which led to comprehensive changes in people’s lifestyles, first appeared in the Middle East, Asia Minor and the Far East, places of wide and regular rivers.

The ancient settlement of Çatalhöyük is one of humanity’s most important heritage sites, and had a population of more than 8,000 people during the Neolithic Age. Houses made of adobe brick draw great attention for their unique wall paintings.

Role of intangible heritage in development

Speaking at the recent 8th International Committee Meeting in Baku, Oğuz said they decided to hold a meeting on “the relation between sustainable development and intangible cultural heritage,” which would be led by Turkey.

During the meeting, which is to be held in collaboration with the Culture and Tourism Ministry and the Foreign Affairs Ministry, the places of intangible cultural heritage in the sustainable development under the light of UNESCO’s 10-year information accumulation of the Intangible Heritage works will be discussed.

“What can be the positive effect of intangible heritage on sustainable development? How can we plan the management of heritage presented to the world heritage list? For example, there are some examples, such as Turkish coffee, French cuisine, Mediterranean diet and Japanese kitchen, and they have a commercial dimension. How can we determine their criteria? It is very important to discuss all of these things,” Oğuz said. 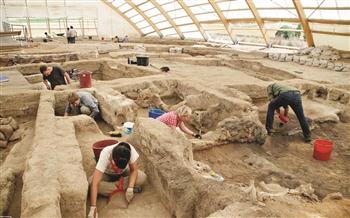