Nasreddin Hodja, a legendary Seljuk-era figure who is known for his humorous and often-pedagogic tales, is set to be the topic of an opera geared toward children.

According to a statement made by the Ankara State Opera and Ballet, the world premiere of “Nasreddin Hodja” will be made Jan. 26 on the Leyla Gencer Stage.

The opera, choreographed by Özge Ay, will feature famous anecdotes from Nasreddin Hodja.
The orchestra is conducted by Mustafa Erdoğan, while the stage design and costumes were made by Sinan Ayber and Tülay Usta, respectively.

Zeynep Çelen Tamer, who adapted the opera for the stage, said she hoped to contribute to children’s learning and enable them to express themselves easily and use their creativity.

Nasreddin Hodja is a renowned Turkish humorist who is assumed to have lived around 800 years ago in Akşehir in Central Anatolia.

Although historical information about his life and personality is sparse, according to tradition, he was an important philosopher with a view of life as stimulating as it was amusing. With his vigorous social persona, Nasreddin Hodja constitutes the essence of Turkish humor, with stories and anecdotes emanating from his character applied to situations down through the centuries. 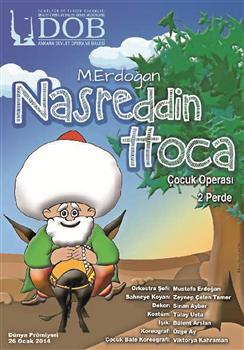 The opera will feature famous - and surely hilarious - anecdotes of the favorite humorist of many.