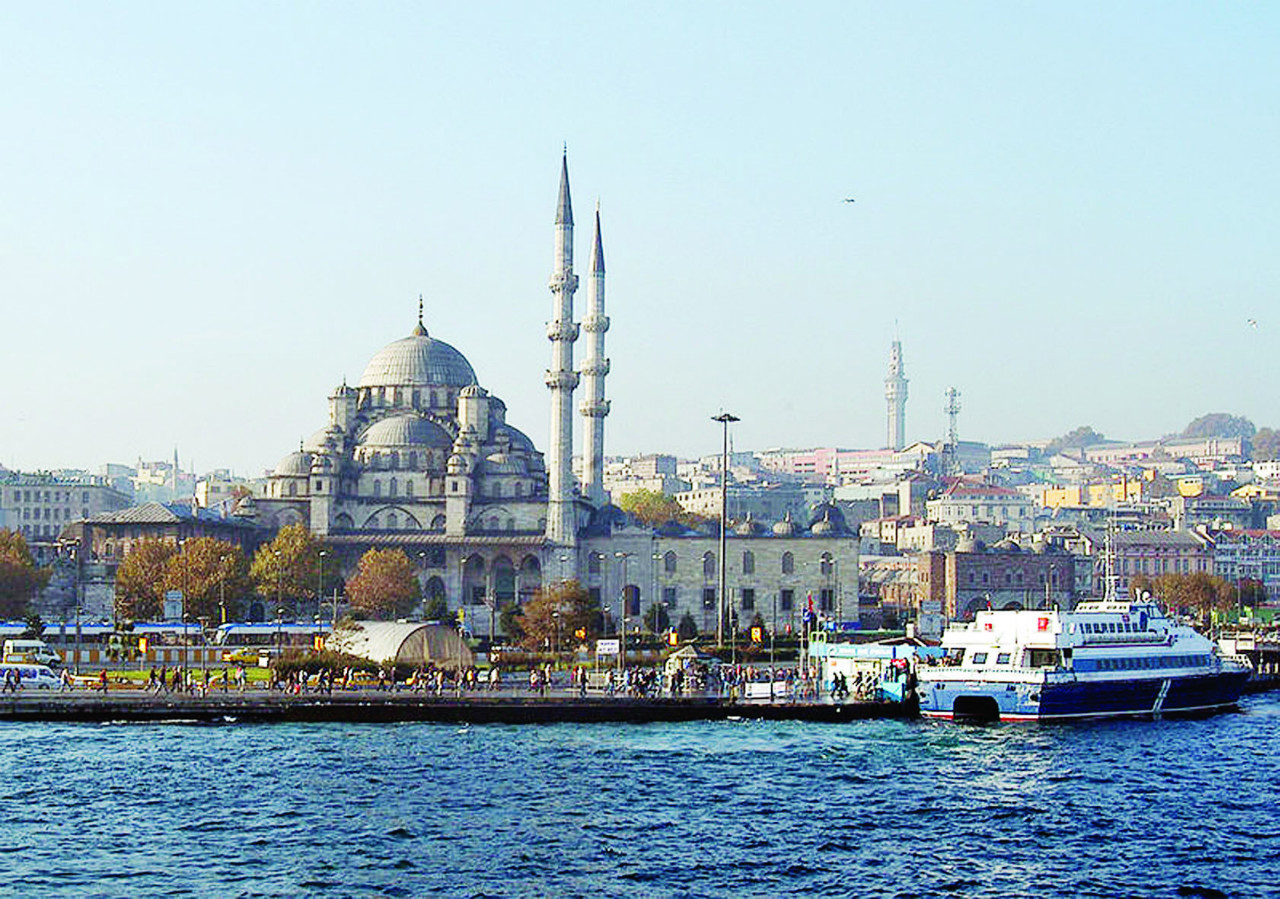 But the mosque, which dominates the Eminönü area, was almost not made. Valide Sultans (mother queens) showed off their charitable inclinations by commissioning mosques, fountains and schools. It was expected of them. So when Valide Sultan Safiye took time off from her political machinations in 1597, she decided it would be a good idea to build a mosque in Eminönü, even though the usual imperial practice until then had been to locate mosques on top of hills from which they could be seen for miles around. Sources are not very clear about why she chose Eminönü, although it has been said she wanted to expand Islam. The land there was marshy as it might as well have been, because it is right at the entrance to the Golden Horn and it was where boats unloaded cargo for distribution throughout the Old City. At the same time, it was an area where Karai Jews lived; their homes and businesses were expropriated and they were paid twice what they were worth. But according to Henry Matthew in his book “Mosques of Istanbul,” the money was embezzled so the Jews returned to the area.

The preparations were made in 1597 for Grand Vizier Hadım Hasan Paşa to lay the foundations for the Yeni Cami, but he was dismissed in 1598 and the ceremony had to be postponed. The foundations were eventually laid later in 1598, three years after Safiye Sultan’s son (Mehmed III) took the throne. The architect Davud Ağa, who was trained by Mimar Sinan, immediately ran into trouble because of the water-soaked ground. He died in 1599 and was replaced by Dalgıç Ahmed Çavuş. Matthew noted the architect apparently acquired his nickname Dalgıç (diver) “because he built a series of piers with bridges between them.” The death of Safiye Sultan’s son and the ascension of Ahmed I in 1603 put a stop to her power and since the latter wasn’t interested in her mosque project, all work on it stopped. 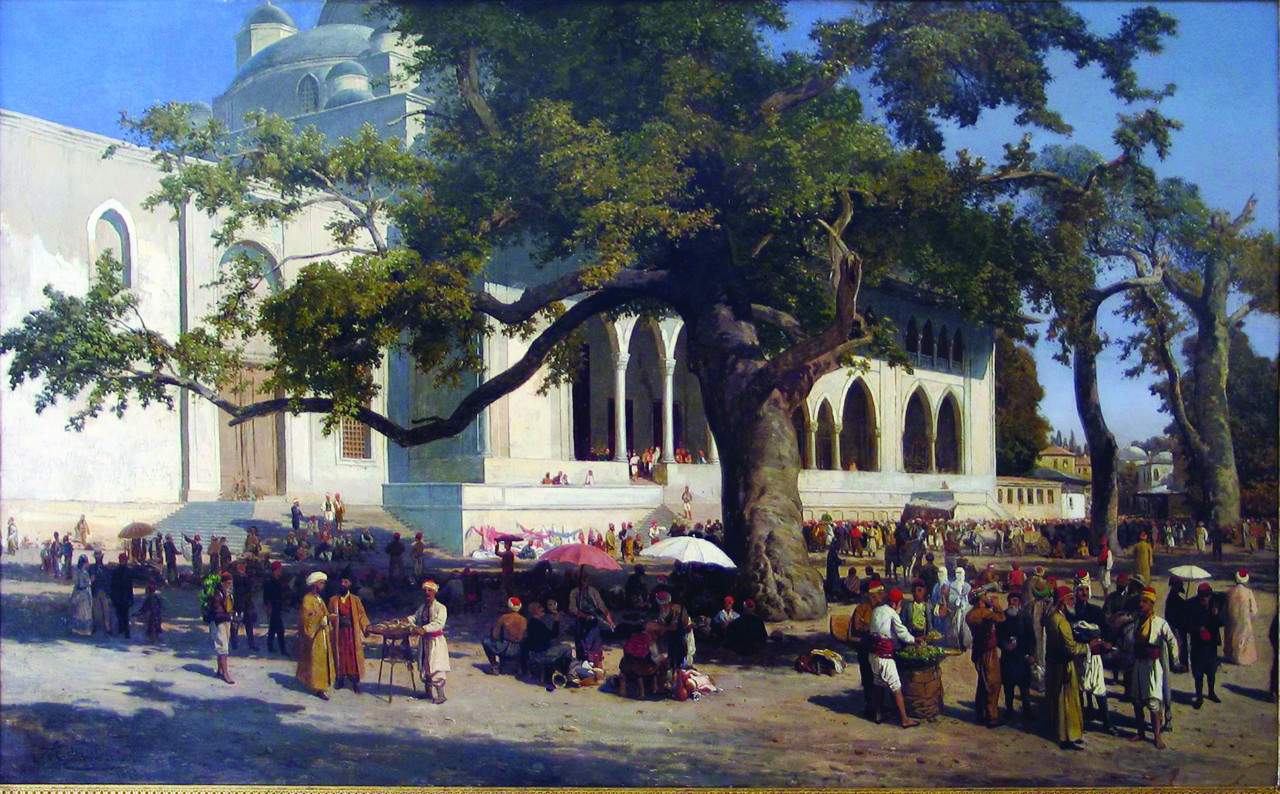 For the next 57 years, the building was left to fall into ruins and was heavily damaged in a fire that broke out in 1660 and continued for 49 hours. Nearly 300 palaces and mansions, 360 mosques and masjids, more than 150 hans, hamams and caravanserai and 80,000 houses, stores, madrasahs and lodges burned in the districts of Beyazid, Süleymaniye, Şehzadebaşı, Fatih, Mahmutpaşa, Hocapaşa, Tahtakale, Sultanahmet, Unkapanı and Samatya. Approximately 4,000 people died.

At this time, Sultan Mehmed IV was on the throne and his mother Turhan Hatice Sultan was the valide sultan. She could see the ruins of the mosque and much of the burned part of the old city from the harem at Topkapı Palace, so it must not have taken much convincing to persuade her to re-commission an architect to complete the job. Chief Architect Mustafa Ağa was chosen in 1661 and he followed the plan that Davud Ağa had drawn up nearly 60 years earlier.

Yeni Cami and its complex

Yeni Cami, which was completed in 1663, was the last of the sultan mosques to be built. It consisted of the mosque, which was surrounded by a complex, as was usual in the Ottoman period. Yeni Cami’s complex included the mosque, two minarets, a kasır, mausoleum, fountain, bazaar, primary school, Quran school, madrasah, and outer walls with gates and shops. The outer walls no longer exist, pulled down probably prior to the 19th century if paintings and engravings are anything to go by. The primary school and Quran school no longer exist while the bazaar, what today is called the Mısır Çarşı, and Turhan Hatice Sultan’s mausoleum are now separated from the mosque by a road.

The mosque has at times been compared with Şehzade Camii and Süleymaniye Camii, both works by the great Mimar Sinan. The main dome, which is seated on four pillars and four arches, is 36 meters high and 17.5 meters in diameter. Twenty-four windows pierce the dome. “The four half domes and myriad small domes and weight towers gathered around the main dome create a restless form,” Matthew said in “Mosques of Istanbul.”

Yeni Cami is known for its internal decoration and tile workmanship. The tiles, which extend half way up the walls, are from İznik with the colors blue and light green predominating. There is one tile panel that depicts the Kaaba, similar to the ones that can be found in Topkapı Palace Museum. The minber, which was made from carved white marble, is particularly a valuable work of art.

The kasır, or mansion, was attached to the mosque on the southeast side with an arch. Although it is known as the Hünkar Kasrı (The Sultan’s Mansion), it was built as a place so the valide sultans who came to the mosque to pray were able to rest. According to Sudi Yenigün in his book, “Sur İçi Camileri” (an Istanbul Belediye’s Culture, Inc. publication), entrance to the kasır, which overlooks the sea with its busy traffic, is either from Eminönü Square or from its left side. He added that Valide Turhan Sultans not only used it to rest, but during the month of Ramadan, she took up residence there.

The top floor of the kasır has two rooms covered with domes and tiles from floor to ceiling. Three of the five inscriptions in the tiles are from the Quran and two are part of a commemorative poem by Asimi. The lower floor had rooms for servants. There are fireplaces covered with tiles, ceilings made of carved wood and doors and windows decorated with mother-of-pearl. As for the main room (iwan), it leads directly to the sultan’s lodge inside the mosque. Built on the remains of the Byzantine walls, there’s a small tunnel that leads from Eminönü Square to Bahçekapı. 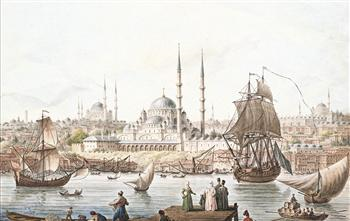 Yeni Cami and the port of Istanbul from the late 18th century. Jean-Baptiste Hilaire. (Pera Museum)