Homepage > Historical building in Istanbul reopens as a library

Historical building in Istanbul reopens as a library

In its 100th year, Kadıköy’s historic Şehremaneti building, which served as the Kadıköy Municipality building for many years, is now a library

The historic Şehremaneti building in Istanbul’s Kadıköy neighborhood, a prime example of cultural heritage in the city, has been restored and turned into the Kadıköy History, Literature and Art Library (TESAK).

“This is a library open to the public, and it will also host events like seminars and meetings. We want this place to be a place of attraction just like a university campus. It depends on the people of Kadıköy and book lovers as well,” said İlber Ortaylı, a prominent Turkish historian and a consultant for TESAK,
noting that Istanbul used to have more libraries.

“Actually Istanbul always had libraries throughout history. Libraries have existed since the 18th century. Most of them were in Suriçi [Fatih], but they have been closed down,” he said.

The library, which will have room for 120,000 books, was opened on March 15 following its restoration by Kadıköy Municipality.

Kadıköy Mayor Selami Öztürk said they had done many things to improve the cultural and artistic life of the neighborhood, erecting cultural centers and sculptures everywhere. “Kadıköy is in a position to lead Istanbul’s cultural life,” he said.

The Şehremaneti building, which has so far served different functions, was restored in 1984, becoming the Kadıköy Municipality Assembly Building, Öztürk said.

“Later on, it moved to a new building in Kozyatağı, and we decided to turn this building into a specialized library. This library is open to everyone. Its garden will also be organized for people to come and have a drink and read books. If the other buildings owned by the Treasury are handed over to us, we will have a nicer venue. Also, here the erection of a statue of the intellectual Celal Esad Arseven, who served as Kadıköy Municipality Department Chief in 1913-1914, is important for Kadıköy’s cultural life,” the mayor said.

Among the attendees of the ceremony was Nilüfer Gülsoy, who donated the 30,000-book collection of her late father, former Turkish President Celal Bayar, to the library. Gülsoy said one of her dreams had come true thanks to the library.

From municipal hall to library

The Şehremaneti Kadıköy Building, which is located right opposite the dock for the ferry to Beşiktaş, was built by Armenian architect Yervant Terziyan between 1912 and 1914 and subsequently witnessed many historical events. After undergoing a restoration process in 1995, the building served as the Kadıköy District Governor’s Office and then as a building for the municipality. On the 100th year of its establishment, the building was reopened as a library. In addition to Gülsoy’s books, a number of other valuable works have also been donated to the library, which will also host talks and various events. 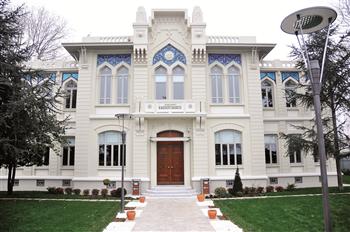 Kadıköy’s Şehremaneti building, which has room for 120,000 books, was reopened on March 15 following its restoration by Kadıköy Municipality.