We find Çakır, along with his two assistants Tarık Ongun and Bahattin Duran, speaking at a press conference after they heard they are assigned to officiate games in the summer’s FIFA World Cup. Çakır started with referring to the late African-American civil rights activist.

“I had a dream. You all know Martin Luther King Jr.’s phrase,” Çakır said, adding he worked hard to fulfill his dreams. “We spent 156 days of the year away from our homes. We had 240 training sessions, officiated 56 games. We worked hard."

“Now, we will work even harder to do our best,” he said ahead of this summer’s World Cup in Brasil.
Last week FIFA announced its list of 25 referee trios to be assigned for the game’s biggest event.

Çakır, Duran and Ongun were among nine referee trios from the European confederation, UEFA.

Çakır will be the first Turkish referee in the World Cup after pioneer Doğan Babacan was assigned to officiate the 1974 World Cup.

Babacan, who has made football history with being the first-ever referee to send a player off in a World Cup game in 1974, was also present at the conference.

“I started refereeing in the year 1994 and walked in the path Doğan Babacan has opened,” Bahattin Duran said. Tarık Ongun also voiced his pride.

“Football is my childhood love and it is an honor to be assigned to football’s greatest organization,” he said. “There is no end to working. We will train hard in the next three or four months to be ready in time.” 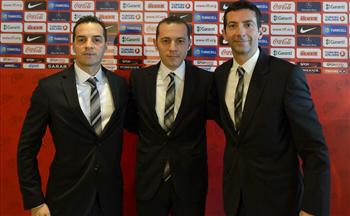 Cüneyt Çakır (C) and his assistants, Bahattin Duran (L) and Tarık Ongun (R), will be the only ones who will represent Turkey in Brasil 2014.