Homepage > Culture village to be dedicated to Rumi

Culture village to be dedicated to Rumi

The life and works of Mevlana Jalal ad-din Rumi, the 13th century poet and mystic, are set to be showcased in a new cultural center to be established in his hometown, the central Anatolian province of Konya’s Sarayönü district.

As well as Sufi music and fine arts courses, Ottoman, Arabic and Persian language courses will be opened at the Rumi Culture Village and Rumi will be presented from different angles in Turkish and English, according to Esin Çelebi Bayru, the International Rumi Foundation’s deputy president. She also said works by Rumi would be performed in the village.

Bayru said the village project was waiting for the approval of the Development Ministry and would go ahead once it was given the green light.

“People from all around the world will be able to come to the culture village and take classes there. We want these classes to be easily followed on the Internet. As well as Ottoman, Persian and Arabic language courses, there will also be Sufi music and courses in fine arts. There must be rules and convention courses in the village, too. Because people are unhappy and uneasy, they lose their own customs. We plan to carry out this project with the metropolitan municipality and universities in the city.” Bayru said.

She added they had also prepared a project for children, adding, “The ‘My Rumi’ project will teach children about Rumi. We will try to teach about him from their viewpoint. This project includes a theater play and books.”

“We also plan to organize a theater festival for children in May. On Sept. 30, 2013, the birthday of Rumi, a mystic music festival was successfully held in Konya. This is why we are thinking of creating a platform for artists to stage performances about Rumi,” she added. 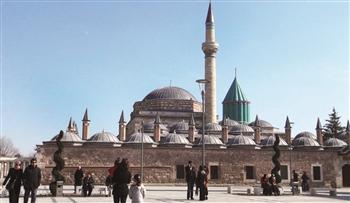 The Rumi Culture Village will be established in Rumi’s hometown Konya’s Sarayönü district. The village aims to introduce Rumi at all points.