Artifacts from ancient site Ani on view at Kars Museum

Objects unearthed during excavations in the ancient Ani, as well as metal work, glass work and coins are on display at the Kars Museum

Ancient pieces that have been unearthed since 1965 during excavations at the ancient site of Ani, which is located between the border of Armenia and the eastern Turkish province of Kars, are being displayed at the Kars Museum. The pieces date back to at least 2,000 years ago.

Kars Museum Director Necmettin Alp said the ancient site of Ani was the first trade city from the Caucasus to the entrance of Anatolia and therefore it had international significance.

He said the pieces unearthed in Ani, one of the most important ancient sites in Turkey, were covering an area of 85 hectares, adding, “Ani had a population of 20,000 people and trade vas very active there. Life continued in the ancient city until the 15th century. During this time, mosques, churches, baths, palaces, structures of civil architecture examples and castles had been built within a five-kilometer long city wall.”

Alp noted the whole ancient city was a first-degree archaeological area and continued, “Its vicinity was also declared as a third-degree archaeological area. Excavations have been continuing there since 1965. Earthenware pieces found during these excavations, metal work, glass work and coins are on display at the Kars Museum. Excavations started in 1965 with Professor Kemal Baltan are still ongoing. Between 1989 and 2004, Professor Beyhan Karamağaralı maintained excavations. Since 2005, work continued under the leadership of Professor Yaşar Çoruhlu for five years. The Kars Museum Directorate has also been leading the excavations since 2001.”

Alp said archaeological excavations had been completed at the Ancient Road, Ebu Manucehr Mosque, the Seljuk Bath and Polatoğlu Church in Ani, and for this year’s excavations, they had determined a new area close to the Bostanlı River outside the city walls.

He said thousands of objects unearthed in Ani were in the museum. “During the first three-year excavation term, between 1965 and 1967, Balkan brought more than a thousand pieces. Karamağaralı brought a similar number of objects over the 16 years. New ones were also brought to the museum after 2005. Now, the museum is home to thousands of pieces. These pieces are from the early Bronze Age, 5,000 years ago. The closest objects to our day dates back to 1,500 years ago. They are earthenware and metal work.” 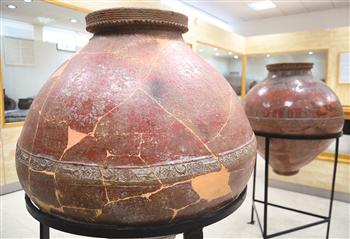 Thousands of objects unearthed in Ani have been taken to the Kars Museum for display since 1965. The objects date back to 2,000 years ago at least.