Homepage > Archaeologists on the door steps of tumuli in İznik's necropolis

Archaeologists on the door steps of tumuli in İznik's necropolis

The northwestern province of Bursa’s İznik district has been home to various civilizations for centuries. There are nearly 2,000-year old tumuli in the district and the tumuli have three-four tons of massive stone doors. The fact that the components of these doors are still working is surprising even for archaeologists.

The tumuli, which have been unearthed in the necropolis area in Dörttepeler neighborhood by farmers or during road constructions, date back to 2-3,000 B.C.

Uludağ University Faculty of Science and Letters Head of the Archaeology Department Professor Mustafa Şahin said that the tumuli were in the grave style of Hellenistic era and they were built in the Bithynia Kingdom.

He said that particularly one of them was still very strong with all of its components after 2,000 years, and continued: “This is a good grave that still survives with all of its elements. Even its doors are working properly. They made such a good mechanism and shaft that you can open and close the 3-4 tons of door even with your finger.”

Şahin said that the region had four tumuli, adding, “I don’t know any other example that has been preserved strong like that. Maybe it is a coincidence but I have never seen such a grave with strong gates in other necropolis I have visited. The grave has two doors and both are strong and usable. The doors still have hinges. This is a really unique example.”

Şahin said that tumuli were belonging to the notables of the city since they were expensive structures. He said they estimated that the members or relatives of the royal family were buried in those tumuli in the Bithynia Kingdom era.

The four-meter-wide and five-meter-long grave was a family grave and it included beds and pillows made of stone. “Bodies were laid down on stone beds and doors were locked. The place of the locking mechanism can still be seen on the doors. They are well-protected because they were made of bronze. Five or more generations were buried in the same chambers. The bones of previous bodies were put away and new ones were buried in their place. In this way the graves were used for long time. Moreover, legal arrangements were made in the ancient ages for other people to not be buried in these graves. We know it from the inscriptions. There were heavy fines.”

Şahin said that treasure hunting and illegal excavations were a bleeding wound of the İznik region just like in the other regions. “This problem can be defeated if scientists enlighten people. We, scientists, have passed it over. We wanted the state to do it. We need to visit all villages and tell people the importance of the value of ancient sites,” he said. 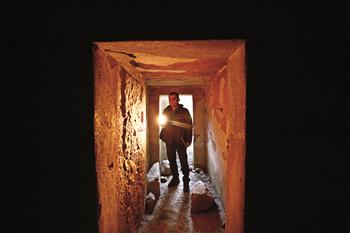 The tumuli are in the grave style of Hellenistic era and they were built in the Bithynia Kingdom.
The fact that the components of their doors are still working is surprising even for archaeologists