Ancient Ephesus city introduced at a conference in New York

Hosted by National Arts Club Archaeology Committee Chairman Michele A. F. Kidwell,
the conference drew students and members of the public with an interest in archaeology and history.

Stating he had been the field director of the Aphrodisias excavations at NYU for two years, Sokolicek said he went to Ephesus for the first time in 1997 for a project when he was a student.

Kidwell defined her visits to Ephesus as “experiences that change one’s life.” She said after returning to the United States, she published an archaeology magazine and worked for the Metropolitan Museum Archaeology Department.

The chairman also said she had given many conferences in a plethora of places such as the New York Public Library.

Speaking at the conference, Özsoy said Turkey was on UNESCO’s world heritage list with 11 sites and U.S. tourism agencies offered archaeology programs to their customers visiting Turkey. She said the main focus of interest for U.S. tourists in Turkey was history and archaeology, adding Göbeklitepe, Gordion, Sard and Zincirli Tumulus would be notable tourism centers in the future.

During the conference, Sokolicek focused on the Hellenistic and Roman era in the Ephesus through photos, drawings and maps, and provided information about excavations that have been continuing since the 19th century.

He also said the world’s oldest and most beautiful city, Ephesus, received 3 million tourists every year. 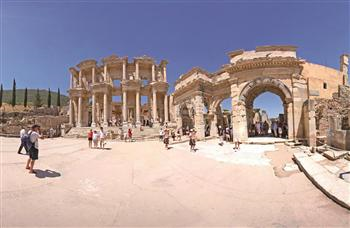 The ancient city of Ephesus is among the most popular tourist attractions.