The Sabancı International Adana Theater Festival, jointly organized by Sabancı Foundation and Culture and Tourism Ministry State Theaters, will open for the 16th time this year on April 14.

The festival program was announced at a press conference in the southern province of Adana on March 25 with the attendance of Sabancı Foundation Director Zerrin Koyunsağan and Adana State Theater General Art Director Mustafa Kurt.

Koyunsağan said the foundation continued to support culture and art events in the country to increase the audience numbers, adding, “We have created the Adana Theater Festival considering the late Sakıp Sabancı’s dream to turn the city into a culture hub. We have been making this dream a reality for 16 years.”

She said that with special events for the 40th anniversary of the Sabancı Foundation, the festival would host newcomers this year. “World renowned French group Ilotopie, which performs on water, will mark the opening of the festival this year. We will also view shows by groups from Iran, Azerbaijan, Spain and Romania. Istanbul’s art lovers will also enjoy the festivals with shows at the Sabancı University Show Center. We invite all locals to the opening ceremony in the River Seyhan on April 14,” she said.

Speaking at the ceremony, Kurt said, “Thanks to the festival, Adana is mentioned as a city of art festivals. Our festival has become a tradition which makes us proud.”

The Adana Theater Festival, which is Turkey’s longest-running theater festival, will host 21 theater troupes, 16 from Turkey and five from abroad this year. Spain’s Yllana, Iran’s Inruzha and Azerbaijan’s State Academic National Drama Theater are among them.

From Turkey, City Theaters, State Theaters and private theaters will join the festival with many performances. “The Miser,” “Hamlet,” “The Wren” and “Good Night Desdemona, Good Morning Juliet” will be some of these performances.

The festival that will be held at the Hacı Ömer Sabancı in Adana and Sabancı University Show Center in Istanbul will continue until May 16.

This year’s award recipient artist will be announced in the opening ceremony.

The Adana Theater Festival has hosted 74 foreign theater groups from 38 countries and more than 5,000 artists in 15 years. The number of performances has amounted to 573. The event has been witnessed by more than 80,000 audience members every year from all around Turkey. 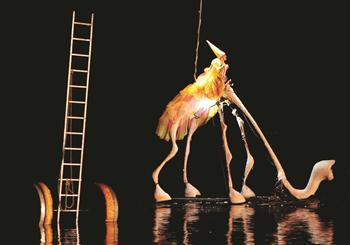 Turkey’s longest-running theater festival will host 21 theater troupes, 16 from Turkey and five from abroad this year.